The Rubettes Have Their First #1 American Hit In America With Band Members John, Mick, & Steve

The Rubettes, who are best known for their 1974 song “Sugar Baby Love” which featured Paul Da Vinci on vocals, hit number 1 around the world, except in America.

The Rubettes split up and formed two separate bands with different lead singers, and continued to sing “Sugar Baby Love” in concert. However, those singing the smash hit never had an official release of the song.

In 2018, the only other only official version of “Sugar Baby Love” featuring founding member John Richardson, and Steve Etherington from the band the Rubettes ft. Alan Williams featured on vocals was released and hit Top 10 in America. 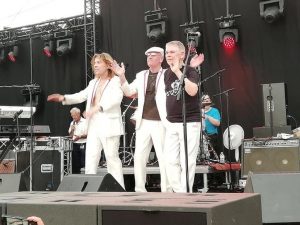 Steve Etherington had back to back #1 solo hits, and John Richardson hit #1 with his band Jayadev’s Mantra Crew with the label since forming the new version of The Rubettes.

The Rubettes ft. John, Mick, & Steve’s first release with Sobel Nation Records, “Ya Lovin’ Rocks,” showcased the vocals of all three members of the band. The song, released on 20 June 2019, at the same time Madonna released her comeback album, hit the iTunes charts around the world higher than the Material Girl.

The Rubettes ft. John, Mick, & Steve are gigging, singing the songs everybody knows and loves. Their original music will keep the Rubettes feel with an updated twist.

The band is also working on their follow up single to be released in 2020 on Sobel Nation Records.

The Rubettes with original band members John Richardson, Mick Clarke, and Steve Etherington are keeping it 70’s ‘GLAMTASTIC,’ updated for the 21st Century and are gaining an entirely new audience!

Please check out the band’s website for updated information at www.therealrubettes.com. On the website, there is “Juke Box Jive” radio, playing only music from the members of The Rubettes ft. John, Mick, & Steve.